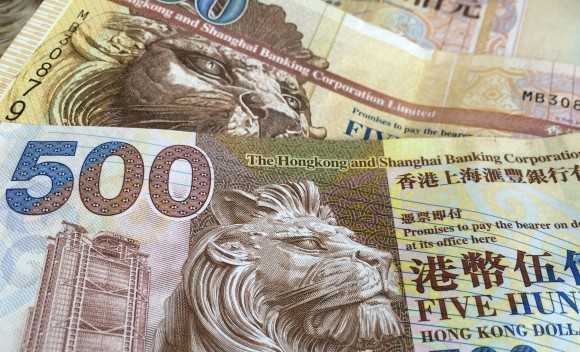 Hong Kong, the ultimate fintech place, or not?

Hong Kong has his share of financial institutes, but is Hong Kong also a good place to have a fintech startup? This is the 3rd in a series of blog posts about startups in Hong Kong. (other 2: Hardware and Logistics).

In this post I will highlight the fintech ecosystem in Hong Kong with my personal opinion and the viewpoints of 3 experts I’ve talked to.
It is a polarizing industry for Hong Kong; experts, entrepreneurs and the government are leaving different views. If it comes to the question: “is Hong Kong a good place for a fintech startup?” the opinions vary.

The fintech industry covers a large scope of services, ranging from:

to many others services.

It’s hard to throw them all under the fintech blanket, all have their own specifics. As with all nuanced sectors – the devil is in the details. Lets look at the angels (pros) and devils (cons) of Hong Kong’s fintech sector:

Anton Saraykin, CEO and Co-Founder at FINNOVASIA says:
“FinTech is booming in London and New York and Hong Kong is trying to catch up with the trend. Fintech became a buzz word earlier this year, when the government announced plans to establish a FinTech steering committee. After the start of the FinTech Lab in Cyberport by Accenture, two more FinTech incubators started this year: DBS Nest Accelerator and Supercharger backed by Standard Chartered and Baidu. There were also a few successful fundraising in 2015 among FinTech companies: WeLab (over $20M USD), 8 Securities (over $20M USD) and CompareAsiaGroup (over $40M USD).”

Startups that want to sell to investment banks might find a good time here.

In the last 4 to 5 years the Hong Kong Startup community has grown from almost nothing to at least 7 different communities and 40 co-working spaces. It has some great advantages, besides the proximity to China, Hong Kong has :
Great Internet connections. FTTB/FTTH of 1Gb are well covering the most populated areas of the city. You can get around with English pretty well. It’s legal framework, Common Law, is based on the English laws. Hong Kong employs a simple and low tax system, and taxable income caps at “only” 17% income tax.
Talents are abundant (and cheap, relatively) a fresh grad will cost you Euro: 1,500 a month, office hours are long (9–19 is normal). Real estate is expensive (NOT an advantage)
Also the startup visa (an advantage) is set up for founders and their key staff to live and work in Hong Kong.

Leonard Weese a Hong Kong based Bitcoin and Information Security Expert says about the pro’s:
“Startups that want to sell to banks might find a good time here, especially if they build for investment banks.”

Because all major banks and financial institutes have a meaningful offices in Hong Kong, if not their head quarters. Best of all, they are situated in a few square kilometers, OCBC, Bank of China, HSBC, Standard Chartered are actual neighbors.

Leonard continues: “For startups building crypto-to-crypto products its the perfect place. There is little administrative overhead and no need for expensive lawyers. Accounting, tax, Anti-money laundering (AML), Know Your Customer (KYC) are all robust and easy to understand, and since Bitcoin is classified as a commodity the HKMA (Hong Kong Monetary Association) has zero jurisdiction.”

“Bitcoin companies will have to work with the police, especially the cybercrime units and the joint financial taskforce, but they are said to be nice to work with. Not risking going to jail (like you would in the United States or Europe) is Hong Kong’s USP in Bitcoin. As long as your startup doesn’t scam people, you can do a lot in Hong Kong.”

David Rosa, a Hong Kong based fintech entrepreneur calls Hong Kong a truly global hub. Echoing a lot of the previous sentiment, but also warns that it can be an unproductive environment. For instance the HKMA hinder willingness to try, making early adoption difficult. Business developers often play the regulation card to hide behind. Due to the scattered bodies of regulators, entrepreneurs face the “who to call” question.

Contrary to, Learnard Weese’s comments, David claims that although all major banks have offices here, their strategic decision makers are still in London and New York. 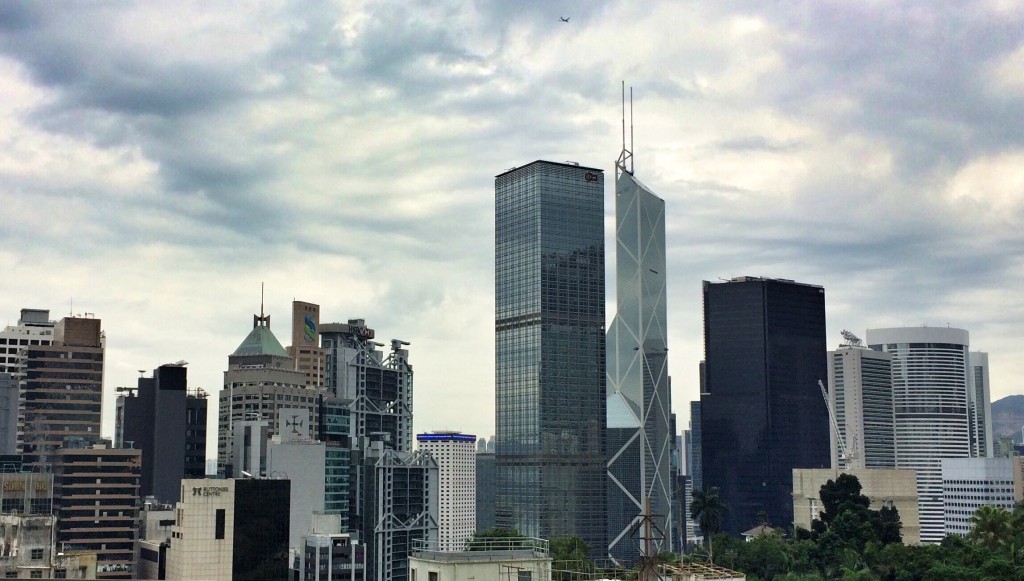 Skyline Hong Kong Banks, HSBC, Standard Chartered, Bank of China, Citi, and many others in one picture.

Anton Saraykin previously mentioned the pro’s, but he still believes that the Hong Kong ecosystem has ways to go:
“The main challenge is the high cost of living and the lack of skilled programmers and software engineers. Another problem, which is common for any destination besides Silicon Valley, is the lack of venture investors. We have talked to over 50 founders within FinTech community for our FINNOVASIA video series; most of them admit that it is not a big problem to raise your first round among angel investors in Hong Kong. Though when it comes to later stages there is a funding gap. There are few investors in Hong Kong who are familiar with the tech sector. Most of the family offices and investment funds prefer to invest in more traditional industries like real estate. Therefore, most of the later stage funding local companies received was from foreign investors.”

“Another problem for startups is a shortage of skilled software engineers and developers in Hong Kong. Entrepreneurs have to compete with large banks and financial institutions for the limited pool of talented IT professionals. The educational system in Hong Kong does not produce enough computer engineers. Often young people prefer to find a job in a large company because of family pressure and non-entrepreneurial culture of Hong Kong.”

A Hong Kong fintech VC who recently moved to Singapore said that comparing Hong Kong and Singapore’s general startup ecosystem: Hong Kong has a better market: China. But if China is your market, setting up shop in Beijing / Shanghai (Software) or Shenzhen (Hardware) makes more sense. With some exceptions in fintech, cross border and logistics.

My personal opinion is that, Singapore has the hype and can better serve South East Asia. But a characteristic of an hype is that it has a peak. Singapore is also home to a lot of wantrepreneurs. It is hard to see this as a sustainable model, free money tends to run out. Singapore startups get matched S$7 for every S$3 “no questions asked” funding from the government up to S$50,000. The question is: how long can the Singapore government keep this up?

There is a reason that in the last 2 years on the Singapore held Echelon events, Hong Kong startups won. Because if you want to do a startup in Hong Kong, you better have a viable business, otherwise you are out of funding / revenue in 6 months. Despite the lower quantity, the quality of startups in Hong Kong are higher compared to Singapore. Singapore has the numbers, but that also means a lot of failed startups that would never have seen the light of day in Hong Kong.

Continuing on the con’s of FinTech in Hong Kong, Leonard says:
“For retail banks there isn’t a lot of innovation in Asia in general, but Singaporean and South Korean banks seem to be moving forward a bit. They want newer and better ATMs, apps, payments and remittance gateways.”
“Startups that want to compete with banks have in my opinion no chance here. Hong Kong is a unattractive market, it’s small, it’s special and an almost impenetrable oligopoly. This is why stripe is still not offered here, paypal and braintree are expensive. Alipay is crippled compared to Mainland China.”

Creating 25 mio HKD capital requirement barriers, that are impossible to climb for a startup

“It’s not so much license fees or regulation that is crippling these businesses, but they have an insanely difficult time getting bank accounts. I think that banks aren’t malicious and coordinated in their attempts to shut out fintech, but they don’t know how to deal with any kind of (out of house) technology on top of their systems. It doesn’t help that, the HKMA is cautious and in my eyes the most innovation-phobic organization in Hong Kong.

Leonard continues:
“There is new regulation coming up soon, called ‘SVF’ (Stored Value Facilities). I’m pessimistic about this too. It might make it easier for companies like Stripe, Paypal or Alipay to work more efficiently here. Or maybe we even see something like amazon coins taking off. But I think it’s just regulation to cement the status quo with Octopus and Paypal in position. Creating barriers of entry that are impossible to climb for a startup (all you need to know is that there’s a 25 mio HKD capital requirement).”

So Hong Kong is definitely not the ultimate fintech spot, it isn’t covering the 100% of FinTech. But has his sweet spots, so depending on what kind of fintech you’re doing, Hong Kong can be your place (or not).
Let me know your opinion or remarks about this; discuss…

If you found this an interesting read, please consider liking this post for my personal motivation

Also, Anton pointed me to the biggest FinTech event in Hong Kong so far on 9th of December: www.finnovasia.com for more information.

← Why Hong Kong is a good base for a logistics startup?
WeChat as a mobile phone? →