Sex sells, that’s the credo for a lot of things; Internet, VHS-tapes and Advertising. Some say it’s because we, as human beings, have a “lizard brain” that responds instinctual to certain primal urges like food. Sex and reproduction is definitely another primal urge.

So some startups (like WeChat, aka “WeCheat”) with an initial low customer count intentionally let Sex be a driving factor for on-boarding or user growth, until they have enough users or are “forced” by the general public to do content and user screening.

Borderline personalities and the effect of depersonalized messages.

When I installed Whisper last week I didn’t know what to expect. Whisper is an mobile app that allows people to write a small text, choose a background picture (related or non-related to the text) and post that as a picture on the general timeline, anonymously. Only a changeable self chosen screen name and location is visible. So basically it’s depersonalized picture posting.

A lot is already written about Whisper, about how it’s a relief to people, that you have to be careful with the real anonymously and that’s A Window to The Soul.

While I was browsing the app I, of course encountered the sex posts, but it’s absolutely not hard to find another problem: depressed people, cries for attention and plain: “I’m going to kill myself”. (some disturbing “suicide” screenshots at the end of this posts)

Beside just lies, the most logic reason would be that the posts are written by people with borderline personality disorder (BPD), “the essential features of which are a pattern of marked impulsivity and instability of affects, interpersonal relationships and self image” where “Self-harm and suicidal behavior” are common. As many as 80 percent of people with borderline personality disorder have suicidal behaviours. It’s seen in every culture like  Japan ( Manga Confidential confessions) and the US, it even was first called  an “American disease” (Alarcon & Leetz, 1998).

2% to 6% of the general population has BPD

Some depressing post on Whisper I found in just less then 5 minutes, mostly in the “Nearby” mode (Hong Kong): 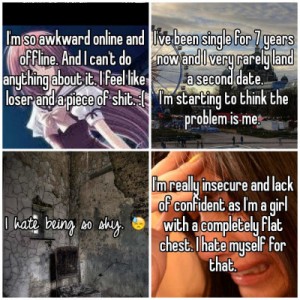 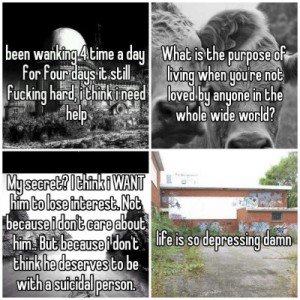 Some more disturbing examples that I found in just 10 minutes: 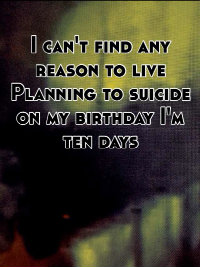 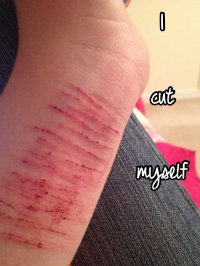 I don’t know in which direction this is going and where it will end, but the 2 pictures above are very, very sad and those people need help. Nobody can say this is a real thing or just a cry for attention. I hope the latter and that he/she gets that help.

So if you want to be shocked by the amount of depressed and low self esteem people, do use the Wishper app. If you’re weak hearted, dislike human suffering and can’t stand sad people, don’t.

Let me know what you think via Twitter (@jebbery)

← When is a startup not a startup anymore?
Alibaba’s IPO and the Catch 22 →